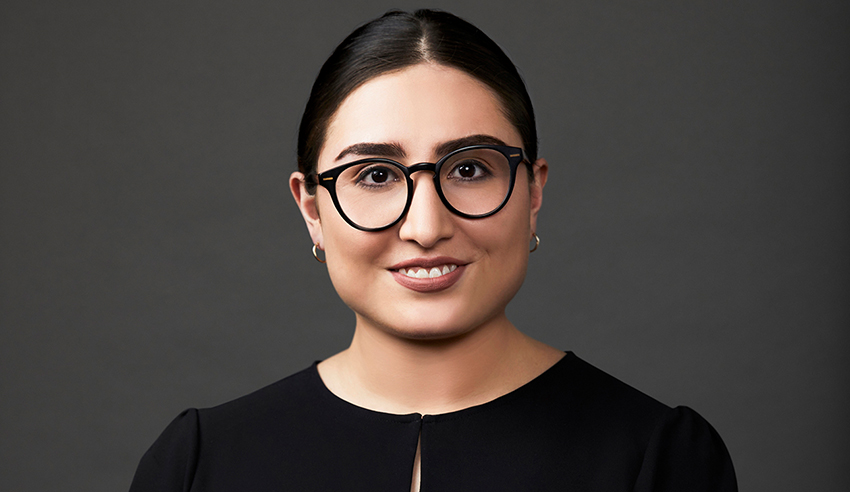 Whilst getting your foot in the door as a young lawyer is important, it’s more important to find a firm and working culture that works for you, said this lawyer.

Olivia Irvine is a lawyer at Hazelbrook Legal, as well as a two-time winner of the Golden Gavel Competition in NSW – a comedic public speaking competition. Speaking recently on The Protégé Podcast, Ms Irvine emphasised the importance of challenging the preconceptions about yourself – particularly when it comes to the type of law you want to practice in – and how this has helped her career.

Despite facing a number of challenges after originally wanting to work in community legal services and ending up on a different path, Ms Irvine said she’s a better lawyer for it.

“One of the things that I love about my job, in particular, is that they really affirmed for me that what I brought to the table was important and what I brought to the table was special and unique, and especially in a boutique environment, it was something that I was really keen to be a part of because they have a real emphasis on this culture and this teamwork and they also give you a chance to do things, which I think as a young lawyer, is not something which everyone gets,” she said.

“I think sometimes, you’re siloed into one or two legal issues that you do all the time under a huge amount of prescriptive oversight, and I think being able to have a more collaborative relationship is something which I really, really valued because I think it allowed me to bring to the table what I think was unique about me, which was not necessarily the things that were going to make me great at being a one subject graduate rotation kind of lawyer.”

Whilst not every young lawyer experiences setbacks from the offset, getting out of her comfort zone early on has meant that Ms Irvine has been able to gain a broader perspective.

“If you are ever in an environment which is not making you happy, which is not fulfilling you, which you think is not exactly perhaps recognising the things that you bring to the table, you might want to consider if that’s just how it is. I think a lot of young lawyers accept that that’s just how it is. It’ll just be these five years under crushing time pressure, underpaid, getting yelled at, things like that. And I think you might want to think about if that really is how it is or if that should be how it is,” she said.

“And I know that it’s a huge privilege to be able to leave a job. I think that that’s massive to be able to do that and I know that not everyone is in that position, but I think the other thing to think about is that sometimes when we’re feeling really trapped in one thing, that we should try and see if we can look at other things, because we’re not just lawyers, we’re people. And even if we’re looking at just the lawyer aspect, you’re not just one kind of lawyer. You’re a professional, you bring a lot to the table. Doing things like young lawyers’ competitions, I think especially competitions like Golden Gavel, are really important because they show lawyers as something other than corporate machines.

“I think feeling that kind of sense that you’re really accomplishing something is really beneficial, and also just doing things that are completely, completely not legally related. I actually illustrate birds, which I didn’t see myself doing either but I just really enjoy doing something sometimes that I’m not even necessarily good at, but I just do it because it makes me happy and it makes me, me.”

Particularly post-pandemic and amid the Great Resignation, younger lawyers should be reflecting on what they want out of their careers.

“There are all these issues that are on the horizon and that are happening right now that are extremely scary and big to grapple with. So, the Great Resignation, changes in the economy, but we’ve also got issues like that we’re to look at the way in which sexual harassment happens in spaces, particularly legal spaces. We’re also starting to look at things like climate change and how offices are dealing with that, and I think it’s never going to be as simple as you just have to go out there and you can only work for the best companies that are going to treat you right, because I know that not everyone knows coming in and I think a lot of people feel like they don’t have a lot of options,” Ms Irvine added.

“And so, I think if you are in a position where you’re feeling guilty about these kinds of things, you can look at other ways that you can change the profession and that you can feel comfortable in yourself in what you’re doing, but I also think, if at all possible, just look around. You don’t have to make it really obvious to your work, but just try and look around because there really are places out there that are better than others at treating lawyers like people.”