Do lawyers trust politicians to follow through on campaign pledges?

An informal survey of Lawyers Weekly’s audience indicates that legal professionals across the country are sceptical that our soon-to-be elected representatives will stick to their promises. Here, four lawyers who are running for Parliament reflect on why lawyers might lack faith and why they should have it moving forward.

This past week, Lawyers Weekly ran a poll on its LinkedIn page, seeking to determine the extent to which legal professionals have faith that politicians will deliver on their campaign promises. You can view the results here.

As of the time of closing the poll, over 800 people had responded. 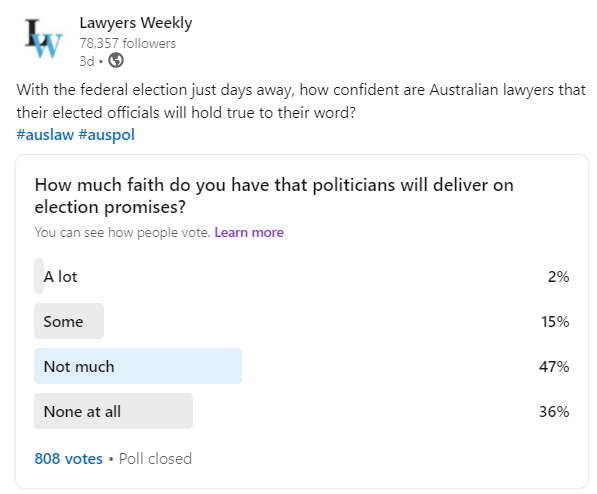 The poll is not a scientific study and should not be taken as such. However, it does provide an interesting snapshot into how confident Lawyers Weekly subscribers are that the next federal Parliament will live up to its pledges.

Just 15 per cent said that they have “some” faith, and only 2 per cent noted they have “a lot” of faith.

While the poll did not seek to determine the reasons for lawyers’ faith or lack thereof, one potential explanation is the desire of many lawyers to see greater integrity and transparency in federal politics.

As reported by Lawyers Weekly, the establishment of a national integrity commission ranks highly as an issue that lawyers deem significant in casting their votes for this year’s federal election.

In December 2021, forty-six per cent of legal professionals surveyed by Momentum Intelligence said that a federal ICAC was an important issue for them when choosing who to vote for. When surveyed again in April 2022, that percentage slipped down to 35 per cent.

In the wake of the poll’s findings, Lawyers Weekly reached out to lawyers who are running as candidates for the Liberal Party of Australia, Australian Labor Party, Australian Citizens Party, The Australian Greens, as well as an independent, to comment on what they would say to members of the public who have lost faith in politicians delivering on election promises.

Sarah Jefford, a surrogacy lawyer running for The Greens in the Victorian seat of Wills, highlighted the need for that national integrity commission.

Ms Jefford – who spoke recently on The Lawyers Weekly Show about her candidacy and how her personal experience with surrogacy has shaped her career – said: “I would say that we expect more from our colleagues and friends than we do from our elected representatives, and that we need a federal integrity and anti-corruption commission to bring integrity back into politics.”

She added: “I think we need to start valuing honesty, authenticity and kindness and expecting our politicians to represent all those things in order to secure our vote.”

Mr Liu, who runs a boutique firm called The People’s Solicitors and was formerly the national president of the Asian Australian Lawyers Association, said: “The best action is to vote! For an alternative party, even a minor party or a new one, which is more committed to ensuring an outcome on election promises ... your message will get heard by everyone.”

Professor Catherine Renshaw, who is standing for the Labor Party in North Sydney, indicated that it’s time for a change.

“Australians’ loss of faith in politics and politicians is the result of a nine-year-old Liberal-Nationals government that has consistently put their own personal and political gain over the needs and prosperity of our country,” Ms Renshaw said.

She continued: “It is understandable in such circumstances to feel disillusioned, but I am standing as a candidate in this election for the Labor party as I believe that it is not our political system that is broken, but instead the party in power that has failed, and that a strong Labor government is capable of restoring the faith in Australian politics that has been lost in recent years.”

Ms Renshaw spoke on The Lawyers Weekly Show about her passion for human rights and her legal career. She stated on that episode: “I think that we have a responsibility as citizens to be involved in politics, to be politically aware and politically engaged, and you have different capacities at different times to do that. But when you do have the capacity to contribute actively to politics, I think we’re all the better for it.”

Elsewhere, barrister Keith Wolahan – who is standing for the Liberal Party in the Victorian seat of Menzies – highlighted the importance of political parties to our democracy.

Mr Wolahan – who discussed his candidacy on The Lawyers Weekly Show, as well as what his army career taught him about service, proclaimed: “We need to keep faith.

“I would encourage lawyers to get involved by joining a political party. They are crucial institutions of democracy and there is significant capacity for positive internal change,” he argued.

During his appearance on the podcast, Mr Wolahan noted: “I realised that my experiences in the military were a wonderful opportunity to serve and give back. But so is politics and on a larger scale.”

Lawyers Weekly also reached out to independent candidate Georgia Steele, who is running against UAP MP Craig Kelly, for comment, but no comment was received prior to publication. Ms Steele also appeared on The Lawyers Weekly Show recently to talk about why she is running and the in-house and litigation skills that will be most useful to her if elected.

Do lawyers trust politicians to follow through on campaign pledges?

Big Law ‘If you see a gap or there’s something you really want to change, ...